Behind the Scenes of Preacher on the Run

Hello, book-lovers, and welcome to the Preacher on the Run blog tour! This is the first stop on a two-week tour through multiple book blogs, with interviews, excerpts, a giveaway, and more. To kick off the tour, I want to take you behind the scenes of Preacher on the Run. Free admission, come on back, right this way, everyone!

Long ago and far away, in a corner of a teenage writer’s brain, a tiny spark of a story began. It was a Revolutionary War story. It languished for years while other projects happened. Then it went through massive changes. It took shape as a story of the American Revolution in North Carolina. That story was not Preacher on the Run. It was called For Liberty’s Sake and would eventually become Patriot by Night, my current work-in-progress. I had vague ideas of a prequel until I got really, really stuck and my Chief Brainstorming Consultant (Mom) suggested I write the first book first. (Gasp.)

And Preacher on the Run was born.

You see, there was this one character in that Revolutionary War story who was a Baptist preacher turned militia captain. If anyone would have been a Regulator, it would have been him. I love finding unfamiliar history, and that described the Regulator Uprising, a movement of farmers and “common folk” against religious oppression, unjust taxes, and corruption in North Carolina’s British government. At this time in North Carolina, the Church of England’s hierarchical system translated to secular affairs: If no one but the clergy could interpret the word of God, then no one but the government could interpret the law. This caused conflict on numerous fronts, but the most targeted communities were North Carolina's early Baptists, whose core beliefs directly opposed this ideology. When I began writing Preacher on the Run, the story of those persecuted Baptists was uppermost in my mind (and still forms the backbone of the story). But as I went on, I couldn’t help thinking that it really wasn’t about the Baptists at all. It was about people being hunted and harassed simply for following God as best they knew how. That could be any of us.  With this blend of unique, volatile history and Christian influence, the Regulator Uprising seemed like the perfect setting for a story with strong biblical themes and intense action. 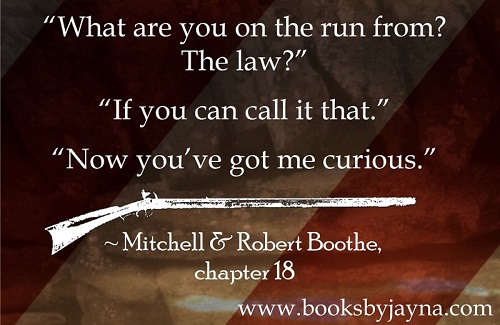 But history is not always straightforward. As I forged ahead with my research, I found polar views of the Regulator Uprising—some sources said the Regulators were cowards, banditti, and rebels, while other sources said they were heroes. Who was right? Well, as is usually the case, I found the truth somewhere in the middle. And then I had to write that middle, telling the story of the heroes without denying there were some belligerent firebrands who just wanted trouble. Writing real history is hard sometimes. There was only one scene in Preacher on the Run that narrated actual historical events, and that was the Battle of Alamance. It was a challenge to weave real quotes and real people into my fictional narrative, but it was a good challenge.

Speaking of challenges, I live in Michigan, solidly in the twenty-first century, and you know what? People didn’t sound the same in eighteenth-century North Carolina as they do in modern-day Michigan. I deliberately chose not to write in archaic language, but I did try to avoid having my characters use obvious modernisms. Although I have a lot of Southern characters and backcountry settlers, I also chose not to use “phonetic dialect”—Ah s’poze thar’s nuthin’ wrong ’ith thet, but hit’s hard writin’ an’ hard readin’. (And it makes your characters look like hicks. Not to mention, nobody actually pronounces words the way they’re spelled anyway.) I reckon it’s a far sight easier to stick with the normal spellings of things, and if folks don’t cotton to it, well, I don’t half expect to make everybody happy. I researched lists of Southern vernacular, read studies of regional dialects, and listened to audio and video recordings. (Andy Griffith, anyone?) I learned a lot I used and a lot I didn’t—sigogglin is a fun word, but I didn’t want to have to interrupt the story to define unfamiliar words. (Sigogglin means crooked, by the way.) My work was richly rewarded when a North Carolinian book blogger said she was sure I wasn’t originally from Michigan!

Dialogue is my favorite part of writing, but characters are a close second. I often have a character before I have a plot. That preacher turned militia captain, the one who started this whole thing—where did he come from? Well, he came from my writer brain, because I’m relatively sure no one else looked at one of my favorite singers and thought, He looks like he should be in a book. Yes, that’s how Robert Boothe started. (And, by extension, Mitchell Boothe, too, because my hero needed a brother and that singer had a brother and there you are.) However, Robert’s wife, Magdalen, is another story. When I first imagined Robert, I thought he was a widower. I’m not sure why; I just thought it’d make a good story. But writing Preacher on the Run required me to back up and envision what his wife would have been like, and lo and behold, I liked her too much and needed her too much to make her dead. Now I can’t imagine the story without Magdalen. 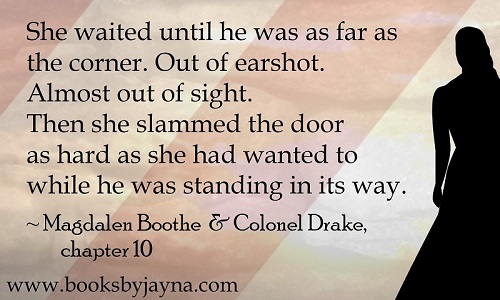 Aside from the relationship between Robert and Magdalen, Preacher on the Run is not a romance, which might surprise some readers. (Isn’t all Christian historical fiction romance these days?) Honestly, I wrote Preacher on the Run partly because I was tired of finding nothing but romance in the Christian fiction section of the library. Not that I don’t enjoy a good romance, but a girl needs a break now and then! I had also had a number of encounters with “Christian” fiction that didn't live up to the label. I’m a firm believer that the Christian life is about more than a prayer or going to church. It’s about Jesus, and it’s about living for Him because He’s the Way, the Truth, and the Life. It’s about showing Him to the world, even though sometimes we really mess up. I wanted Preacher on the Run to be about that kind of Christianity. I don’t know if I succeeded, but I hope I did. I hope Christian readers close this book feeling encouraged and challenged and edified, and I hope non-Christian readers close this book knowing they need Jesus. That really is the best story ever, isn’t it? That a perfect God became man and took our sin on Himself and died in our place so we could have peace with Him if we would just turn from our own way and put our faith in Him? 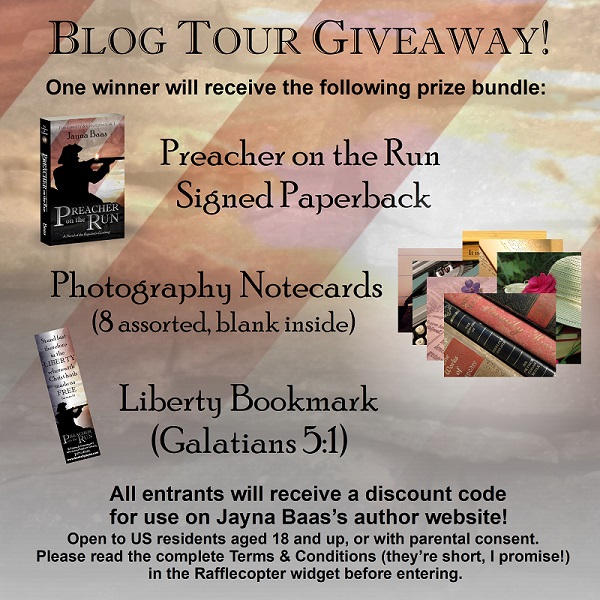 ~ A discount! From now through September 24, the Kindle version of Preacher on the Run is only 99 cents on Amazon. Buy your copy now!

~ Lots of great posts coming up! Check out the tour schedule:

Sept 22: Connie’s History Classroom and Of Blades and Thorns

I’m so thankful to all the wonderful bloggers who have joined me for this tour. I hope you come along for the ride and have a grand old time! Until next time, happy reading, and may the Lord bless and keep you!

Jayna Baas is the author of Preacher on the Run. She is a member of ACFW and The Christian PEN. Sign up for her newsletter and receive a free short story here.