For Liberty & Conscience #1 - A Novel of the Regulator Uprising 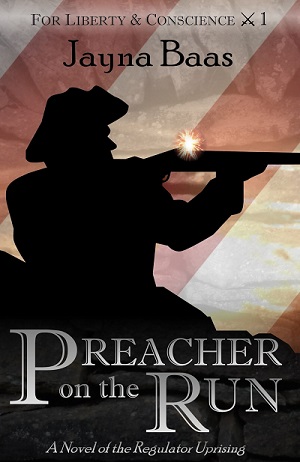 STANDING FOR TRUTH COULD COST HIM HIS FREEDOM.
It’s 1771, and Robert Boothe has spent the last four years leading the tyrant-hating Regulators against North Carolina’s corrupt British government. All he wants is a safe place for his little Baptist church to live and worship God. But the established church wants him to shut up. The governor wants him dead.
FIGHTING FOR FREEDOM COULD COST HIM HIS LIFE.
Being an unlicensed dissenter preacher has already made Robert a target. Then Colonel Charles Drake comes to town with one ambition: winning the governor’s favor, no matter what it takes. And Robert Boothe just might be his last chance.
YOU CAN RUN, BUT YOU CAN’T HIDE.
“An entertaining, inspiring, and worthwhile read.” —The Old Schoolhouse Magazine
Purchase paperback      Purchase eBook      View on Goodreads      Read Free Sample
In a time of political and religious tyranny, thousands took a stand for their homes, their livelihoods, and their consciences. Who were these men? Their British governor called them “insurgents.” Conservative New Englanders called them anarchists. They called themselves Regulators. The best Christian historical fiction takes you to a different time and place and lets you put yourself in someone else’s shoes. What would you have done if you lived in North Carolina in 1771? You would be free to believe as you wished—as long as it didn’t oppose the established religion. Your hard-earned money would go to support the local clergyman’s lavish property. Your pastor might be arrested for preaching without a license. If you wanted to get married, you would have to hire the established clergy to officiate, because it was illegal for dissenters to perform marriages. If you couldn’t pay your taxes, your land would be auctioned—maybe even if you had already paid those taxes. The courts would not help you; they were nests of extortion. In eighteenth-century North Carolina, the Church of England’s hierarchical system translated to secular affairs: If no one but the clergy could interpret the word of God, then no one but the government could interpret the law. Against that system, what could you do? Preacher on the Run gives a glimpse of what many men and women did do—and what it cost them.
Preacher on the Run can be intense at times as characters flee for their lives, fight injustices, and struggle to reconcile their desire for freedom from tyrannical leadership with their faith. Faith plays a colossal role, and gives Preacher on the Run a raw edge as characters are faced with the head knowledge that they’re supposed to trust God and the heart knowledge that it is not as easy as it sounds. . . . And the history. Oh, the history. I knew about preachers and pastors who were hunted and punished by the state church for not registering and being beneath the state’s thumb, but I always thought of it happening primarily in Virginia and Pennsylvania. Reading Preacher not only advanced my knowledge of this rich historical period, but it reminded me how valuable our freedoms are, and how easily we can lose them. – Madi, blogger @ Madi’s Musings
Preacher on the Run is such a thought provoking, worthwhile read! I’m truly glad to have had the opportunity to read about the Regulators and their stand for freedom and truth. – Lauren Compton, author & blogger @ Novels That Encourage
This book easily transports you back to colonial times and the struggles of Christians to come out from under the government run church and follow God and His Word instead of men. – Tara, blogger @ Tower in the Plains
This is one of those books everyone needs to read, to understand what those who have gone before us have been through, how far they are willing to go for the freedom to believe as they felt best. – Kassie Angle, author & blogger @ Soldier Girl Stories

Sign up to receive the first two chapters of Preacher on the Run, plus writing updates, history snapshots, & more!