Merry Christmas, all! This week, in addition to the normal holiday preparations, I’ve been working on unveiling new art for Promise of Refuge, the short story prequel to Preacher on the Run. And here it is: 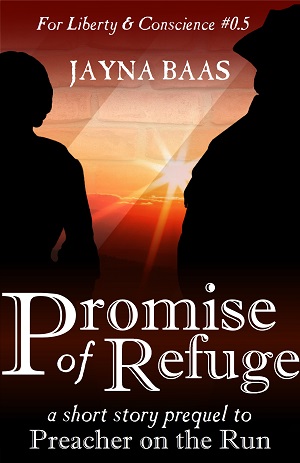 A Short Story Prequel to Preacher on the Run

He came looking for a preacher. He found more than he’d bargained for.

It’s 1759, and Robert Boothe and his younger brother have crossed North Carolina to find their father’s circuit riding partner. But the old preacher is nowhere to be found. And Magdalen Davies wants to keep it that way. She’s willing to help shelter Robert on her father’s plantation. She’s not willing to trust him with secrets that could hurt the people she loves. But Robert needs her help. And Magdalen needs his.

I’ve been pursuing some new advertising venues lately, and I wanted to tweak the art a bit to add some depth and clearly tie this story to the rest of the series, hence the silhouettes. Here’s a fun question: When you look at the new cover, do you think you’re looking at Robert and Magdalen from the front, or from behind?

New art notwithstanding, Promise of Refuge is still available on Amazon for only 99 cents, and it’s still free when you join my newsletter clan. Have a very merry Christmas and a happy New Year!

Buy on Amazon  or  Subscribe for your free copy