I’m excited to announce the release of Promise of Refuge, a short story prequel to Preacher on the Run! This story has floated around in my head for a long time—ever since I wrote about Robert and Magdalen Boothe in Preacher on the Run. You see, I knew Robert had been a circuit rider, and I knew Magdalen had grown up on a tobacco plantation in the east. But I had never fully imagined how they met.

Until now. So, without further ado, I present: 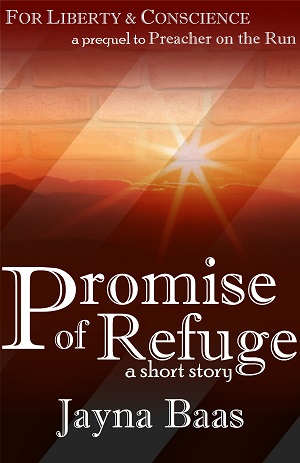 A Short Story Prequel to Preacher on the Run

He came looking for a preacher. He found more than he’d bargained for.

It’s 1759, and Robert Boothe and his younger brother have crossed North Carolina to find their father’s circuit riding partner. But the old preacher is nowhere to be found. And Magdalen Davies wants to keep it that way. She’s willing to help shelter Robert on her father’s plantation. She’s not willing to trust him with secrets that could hurt the people she loves. But Robert needs her help. And Magdalen needs his.

I did some fascinating research in writing this story, delving into subjects such as tobacco cultivation in colonial days and the North Carolina Slave Code of 1715. I also found out about North Carolina’s first newspaper, the North-Carolina Gazette, and learned how the French and Indian War affected the Carolina frontier. Now, a 35-page story doesn’t have room for all of that, but most of it at least got a mention or provided context for my writing. (For those of you who are wondering, this new short story release doesn’t mean I’ve stopped working on Patriot by Night. As my author bio says, I’m notorious for working on several projects at once.)

Because Promise of Refuge is only about 35 pages long, I’m not offering it in print right now. But you can get your Kindle copy on Amazon for only 99 cents. Better yet, you can read Promise of Refuge for FREE when you subscribe to my newsletter! Whether or not you’ve read Preacher on the Run, if you enjoy historical fiction with strong Christian themes, Promise of Refuge is for you. I hope you enjoy reading Robert and Magdalen’s story as much as I enjoyed discovering it!

Buy on Amazon  or  Subscribe for your free copy