Last Christmas, I put a new book on my Christmas list: Heretics of Piedmont. Now, having thoroughly enjoyed this intriguing look at a rarely explored part of Christian history, I’m excited to share an interview with its author, Dustin Speckhals. We covered all kinds of ground, from inspiration to the writing process (I love his advice to aspiring Christian authors), and I hope you enjoy “meeting” Dustin as much as I did. 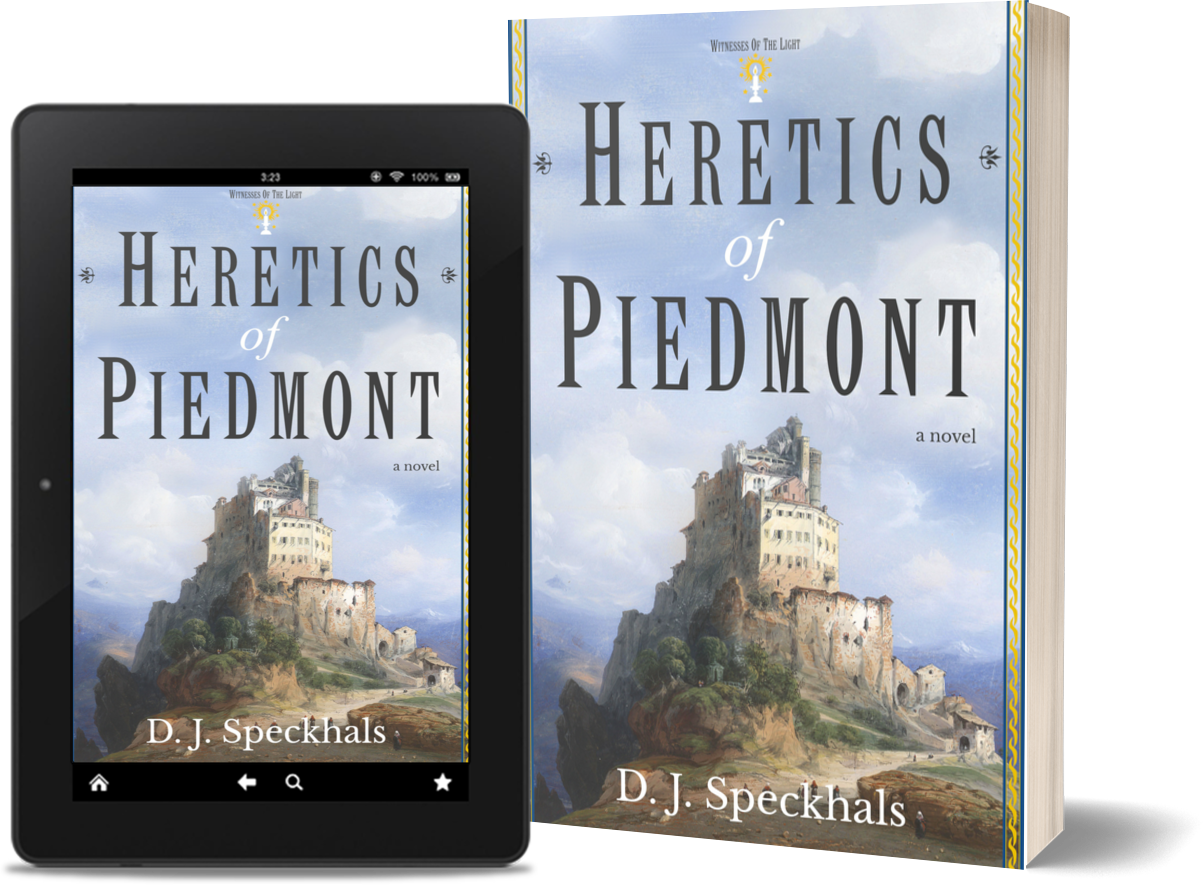 JB: Heretics of Piedmont centers around what the cover describes as an “ancient Christian sect.” I would venture to say most readers aren’t familiar with this sect, which is why I was so excited when I found this book. Can you tell us a little about who these people were and why you chose to tell their story?

DS: In college, I took a course in church history, and the instructor briefly taught about a group called the Waldensians. The Protestant Reformation began in 1517, but there were certainly people who believed in principles like sola scriptura (scripture alone), sola fide (faith alone), and sola gratia (grace alone) long before Martin Luther. The Waldensians were one of those groups, and they were constantly persecuted for their beliefs for hundreds of years, starting in the 1100’s (and perhaps earlier). It’s true that unless you study European religious history, you probably wouldn’t hear about the Waldensians, but their stories are rich and deserve telling.

For ten years after college, I could count the number of times I heard the term “Waldensians” with my hands—and that’s coming from someone who loves studying history! But in the summer of 2020, two things happened that propelled me into writing Heretics of Piedmont. First, I heard about a Christian historian who had visited the Italian and French valleys where the Waldensians lived (and still do to some extent). Then, I read a historical fiction book that presented an intriguing view of history, but one to which I couldn’t relate as a Christian. I thought to myself, “I would love to read a novel about the Waldensians!”

But I found almost nothing. Numerous academic books were written from the 1600’s to the 1800’s, and buried in their pages are so many fascinating stories. Most of these volumes, however, are out-of-print and aren’t very accessible. After I finished reading several of these accounts, I came to the conclusion that I should try writing a novel with the Waldensians as the subjects.

Medieval stereotypes are littered throughout our culture: knights, castles, princesses, Robin Hood, Friar Tuck, and of course the Roman Catholic Church. But what about those at the periphery? What about the Bible-believing Christians who rejected the hegemony of the state church? What did it look like to worship God when most people couldn’t read and didn’t have a copy of the Bible? And how can I find purpose and meaning today through those who lived so long ago? Heretics of Piedmont tries to answer those questions.

JB: I was fascinated by the authenticity of your characters—how the good guys sometimes made bad choices and the bad guys often thought they were doing the right thing. What was that like from a writer’s perspective? Did you have a favorite character?

DS: The main character, Andreas, would be easy to call my favorite, but let me mention Nicolaus Pavarin. He's an innovative Waldensian farmer and leader in his church who has raised eleven children to adulthood. He is also very cautions about outsiders and has overprotective tendencies but learns to find balance over the course of the story.

Some of the authenticity you saw may have come because Heretics of Piedmont is told from the perspective of a Catholic monk who is tasked with spying on the Waldensians. Most readers will naturally sympathize with the Waldensians, so I thought it would be more interesting to tell their story through the eyes of a true outsider. That forced me to present the bad guys with the most sincere of motives rather than a cheap caricature.

Also, it’s easy to romanticize people who stood for their faith. But some died forgotten and alone. We read about heroism and courage in Foxe’s Book of Martyrs, but they were still people who faced hard decisions—and not all chose honorably.

JB: Heretics of Piedmont deals with some challenging subjects, such as persecution and self-defense. What was the hardest or easiest part of writing this book? What do you hope readers will take away from the story?

DS: Subjects like self-defense and persecution seem easy on the outside—stand up for your family, be ready to die for your beliefs. Writing and studying about medieval Christians also forced me to evaluate my own beliefs and why I believe them. Would I stand, or would I falter?

Yet Heretics of Piedmont is not just a story about persecution and oppression. Waldensians faced many of the same challenges Christians face today. When some forsake their faith, how should we treat them? Is it right for believers to completely withdraw from society to protect their own? The characters must navigate questions like these, but they aren’t easy to answer.

As for the easiest part of writing: I love to share stories about interesting cultures and places (ask anyone who knows me)! Did you know the famous treat Nutella has a lineage leading back to a Waldensian chocolatier in northwestern Italy? Or that the first depiction of a witch on a broomstick comes from a Catholic historian describing Waldensian women? But though the facts are fun, it’s a story about characters—Andreas, the disgraced monk; Raimond, the itinerant preacher; Constanza, the peasant shepherdess—and how they challenge those who seek their demise.

JB: I know a lot of aspiring authors who want to share the truth through solidly Christian stories like yours. What advice would you give to these up-and-coming writers?

DS: Leave the preaching in the pulpit! I say that joking, but it’s easy to become overly preachy as a Christian author, especially when religion is the main subject. I have to force myself not to be preachy. Yes, reveal truth, but don’t make fake characters that are only you self-projecting onto the story. Let your characters—even the most virtuous ones—make bad judgment calls and horrible decisions.

JB: Some writers need quiet; some don’t. Some are night owls; others are early risers. Some outline; others write by the seat of their pants. What does your writing process typically look like?

DS: When I set out on crafting Heretics of Piedmont, I had to develop something that fit me personally. In other areas, I thrive on spontaneity, but I knew it would be different for writing a full novel. If I only wrote randomly when I had time, I wouldn’t get far.

Several years ago, I bookmarked an article about an author from Switzerland who described his writing schedule. He wrote on a train during his daily 90 minute work commute and finished in nine months. Also, he recommended a method that sits somewhere between “by the seat of their pants” and outlining called “The Snowflake Method.” To summarize, you start with one well-thought-out sentence, expand that sentence to a paragraph, then expand the paragraph to a page, before transforming the page into four pages. In between those steps, you develop your cast of characters and make a “character bible,” knowing their favorite foods, worse fears, greatest accomplishments, etc. In the end, you develop a spreadsheet listing about 80 scenes.

Then comes the drafting stage: the real time investment. I finished all the “Snowflake Method” steps before deciding to actually write the book. But I then had a new confidence of where I was going, and I felt like the characters were already real. I couldn’t hide it away.

I have a family—a wonderful wife and four children under ten-years-old—and I didn’t want to interrupt my time with them. I decided mornings before anyone woke up would work best for me, so I set my alarm for 5:00 AM and went to bed a little earlier. That gave me two hours of writing before my normal schedule began.

Mornings are quiet, but I don’t like it too quiet. Classical music often accompanies me sitting in front of a computer with a cup of tea (usually not caffeinated...I like my writing mind lucid). However, I’ve also planted myself in the louder areas on occasion; I think there’s something about being near real people that inspires me and gives the story more authenticity.

JB: Tell us a little bit about yourself and what you enjoy doing when you’re not writing.

DS: As I mentioned before, my family is a huge part of my life. Andrea and I just celebrated thirteen years of marriage, though it doesn’t feel that long! We both serve in children’s ministries in our church, and I also help in a Christian camp one week per year.

I’ve been a software engineer for ten years now, mostly focused on web technologies, but also delving into other areas. Right now, I work for a company developing a tennis training system.

For fun, I enjoy running (while listening to an audiobook), reading (I cross into most genres), and traveling (Israel is my favorite place).

JB: Heretics of Piedmont is your debut novel, but I personally want to see more of these characters. Do you have more books in the works?

DS: Yes! Heretics of Piedmont is the first in a series called Witnesses of the Light. I just finished the second book, The Lord of Luserna, and it takes place about a year after the last one. Six test readers are currently reading it, and it’s scheduled to be released in the fall of 2022.

JB: Where can readers connect with you and learn more about your writing?

DS: You can sign up for my newsletter, which I send out about every six weeks, at djspeckhals.com. I also post stories about my family there, along with some historical and spiritual thoughts. In addition, you can find me on Instagram, Facebook, and Goodreads.

Thank you, Jayna, for allowing me to answer your questions. They certainly made me think! 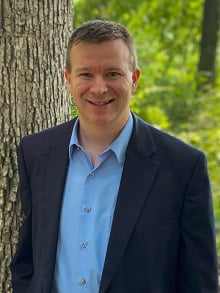 If you like fiction that brings unfamiliar Christian history to life, I highly recommend Heretics of Piedmont! You can read my full review of it here, or simply click below to discover this fascinating novel for yourself.

Learn more and find your copy

Jayna Baas is the author of Preacher on the Run. She is a member of the ACFW and The Christian PEN: Proofreaders and Editors Network. Sign up for her newsletter and receive a free short story here.